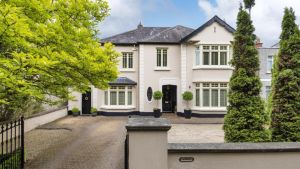 Lakelands Park is a hidden gem off Templeogue Road in Terenure. It’s a quiet little cul-de-sac with just 30 period houses of different styles. Unless you had reason to visit, you would hardly know it is there.

Lakeview at Number 18, is true to its name, as the view from the principal bedroom takes in the lake and swans of Terenure College through a thicket of trees. Indeed there are great views from all the rooms in the house. Those to the rear are of the verdant fields and quaint cricket club house of the local VEC.

Just two families have called Lakeview home since it was built in the 1930s. The current owner, who bought the property from siblings 18 years ago, gave the house a major refurbishment in 2007, with the addition of a large extension to the rear which now gives the house a generous 253 sq m (2,721 sq ft) of space.

The property is a superb combination of form and function, combining practicality of family living within a really lovely decor and layout.

The extension to the rear comprises of an open plan informal living and dining room framed by a line of windows and French doors. “It was the height of the boom and is was so hard to get an estimate from a builder, not to mind an architect or tradesman” recalls the owner of the renovation frenzy that accompanied the peak of the property market.

“That said, the Marvin windows which cost €130,000 to install, will now be a good selling point of the house.”

They are indeed, not just for their triple locking making the house secure, their unique winding system and triple glazing, but also the fact that Marvin framed the window surrounds and panelled the entire bay in the principal bedroom, giving a superb finish to the fenestration.

But the property has many selling points. Firstly it is in pristine condition; the entire space, with the exception of a decorative border tile in the family bathroom, feels brand new.

A custom built kitchen by Italian carpenter Emanuel Vossa was installed just under two years ago, and features double Miele fridges and a large island. From here lies a very practical utility room, which benefits both side and garden entrances, so mucky sports kits can be thrown into the wash without ever coming into the house itself.

New owners won’t be short of dining space: there are two dining areas in addition to the formal dining room which lies at the end of the drawing room, both of which have been furnished under the watchful eye of interior designer Helen Turkington.

In the centre of the house, and accessed from the front hallway and the living room is a home office painted in moody blue. It is a great space and would also work as a library, television or games room, as would the lovely wooden structure in the garden.

The property now has four double bedrooms – down from its original five – as a smaller room was converted into a swish bathroom suite for the principal bedroom.

There is an abundance of well thought out storage, in addition to more space in the attic, which allows the entire house to be streamlined: “There really is a place for everything” says the owner who is moving on to a new project.

The rear garden extends to a generous 30m and will be a major selling point of the house. “I see buyers who tend to look at Dublin 4 and 6 having an interest in this property” says William Moore of Sherry FitzGerald who is handling the sale “you really get more bang for your buck on a price per square metre basis, along with a larger private garden and quiet setting.”

Up the road, number 4 achieved €1.19 million in 2017 and required a complete refurbishment. Lakeview, set behind electric gates and in turnkey condition is on the market seeking €1.795 million.

« Radford family share a picture of their 22 Christmas stockings

What’s a “Good” Deal in Real Estate? 5 Criteria to Consider »